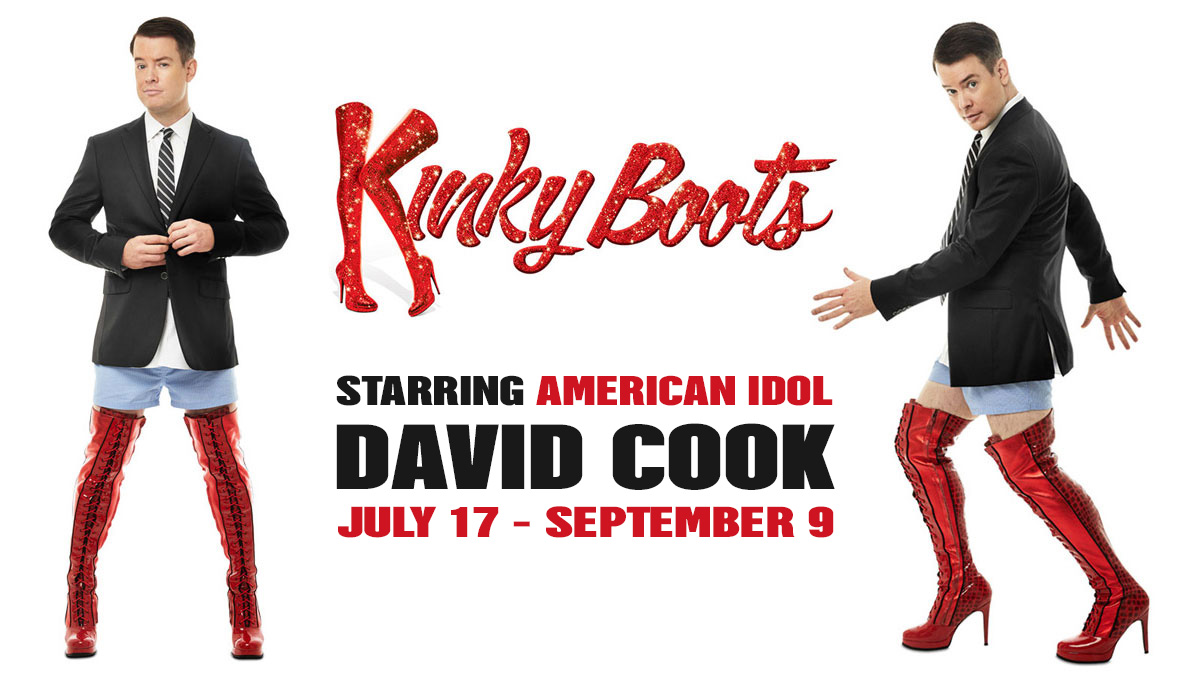 Cook returns to the show after having a blast in his initial strictly limited run this past spring from Tuesday, April 3 through Saturday, May 5, 2018.

“I am so honored and excited to get to come back to the factory!,” Cook said. “Kinky Boots is such a great show, made all the better by having an incredible cast, crew, and staff, and I can’t wait to help tell the story again!”

The winner of six 2013 Tony® Awards, including Best Musical, Kinky Boots features a Tony® Award-winning score by Cyndi Lauper, a book by Tony® Award-winner Harvey Fierstein and direction and choreography by Tony Award-winner Jerry Mitchell. Kinky Boots tells the uplifting and heartwarming tale of Charlie Price, a young man reluctantly taking over his family’s struggling shoe factory and looking for a fresh idea. Charlie meets and finds inspiration in Lola and together, they discover that it takes a good friend to make a great pair.

David Cook (Charlie Price) immediately launched to stardom following his Season 7 American Idol title. He broke several Billboard chart records when 14 of his songs debuted on the Hot Digital Songs chart and 11 of his songs debuted on the Hot 100, and went on to sell more than 2 million albums, including his certified platinum eponymous album. Collectively, David has sold over 5 million tracks worldwide. Based out of Nashville, TN, he has not only found success as a writer for other artists, his 2015 studio album, “Digital Vein” debuted in the top 5 on the Billboard Pop Chart. Cook continues to tour throughout the world in support of his multiple hits. 2018 has brought an exciting new EP from Cook. “Chromance” is available now via all digital platforms.

Kinky Boots has won every major Best Musical Award and is represented around the world with the Tony Award-winning Broadway company now in its 6th year, a London production in its third year (where it won the 2016 Olivier Award for Best Musical) with a recently announced UK & Ireland Tour commencing next summer, a North American First National Tour in its fourth year, an upcoming production in Germany, a Korean production returning to Seoul for a third season this coming Spring and a Japanese production returning for a second season to Tokyo and Osaka in 2019. Other previous productions include an extended run in Toronto (winner of the Dora Award for Musical) and an award-winning Australian production which concluded in October 2017. The Grammy Award-winning Original Broadway Cast Recording of Kinky Boots is available on Sony Masterworks Broadway.

There is a general ticket lottery for each performance; lottery entries will be accepted online (lottery.kinkybootsthemusical.com) beginning one week prior up to 11am EST the day before the desired performance, and names will be chosen at random, for a limited number of $40 tickets. See KinkyBootsTheMusical.com for details and restrictions.